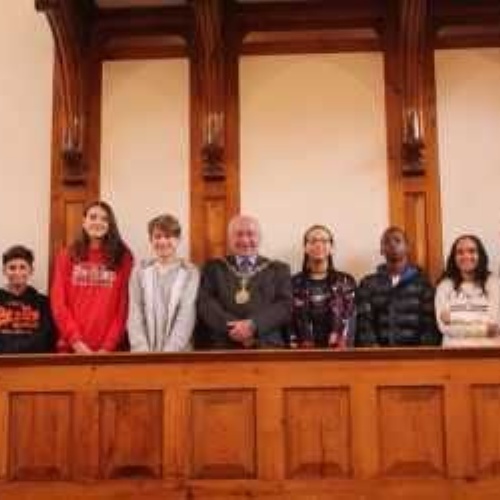 During Inter-faith week, a group of Year 10 students and Miss Hodgins attended an inter-faith dialogue in the Grand to listen to a debate between five different religions about Peace and War. The representatives spoke for five minutes about the religions points of views and explained about their religion.

The first representative to speak informed us about the Baha’i faith, they believe that all religions come from the same source; they believe that the world needs to find a unifying vision of the future society and the nature and purpose of life. When talking about war and peace he said that we should love not tolerate and that all mankind should be united and learn to love each other.

After this, a speaker for Christen faith stated, “Christian faith is when you are faithful to one God and believe Jesus Christ is the son of God and the savior of humanity”. He explained that Christians have two extremes of peace and war, one was the pacifies this is when a Christian will never fight or harm others as it states in the Bible ‘thou shall not kill’ therefore meaning you cannot fight as it is against God’s will. The second attitude is that Christians can fight in a Just War, which is a holy war this is when a Christian fights because they are defending their faith.

Then a representative for Hinduism spoke and stated that Hinduism is a polymorphic monotheism, which means they worship different God because they believe that different Gods represent different aspects of the divine reality. following this she said that it is mainly a non-violent religion that just want peace and only fights against evil, an example being when Diwali festival when the Hinduism faith celebrate the fight of evil.

Following this was a representative from Islam; he began to talk about how the Islamic faith is a religion that believes in Allah as the one and only God (PBUH). A greeting that all Muslims used translated into English is peace be upon all, the representative began to go on about war with no weapons and how war should only be used, in desperate times as a last resort.

A representative for the Sikh faith stated that “Sikhism is a faith that has been around for 500 years and is a faith which believes in spiritual powers and says there is a part of God in all of us.” He then went on to say about how Sikhs teach love and peace but only fight when force to so they can defend themselves.

After hearing this we joined together to ask questions and to discuss what we had learned, the group came up with questions about the different religions for example we asked the Hindu representative ‘what is classed as evil?’ and she responded by saying evil is the wrong things people do with their free will such as murder and theft. My classmates and I really enjoyed this event, it was really interesting to hear the different perspectives from different faiths groups.