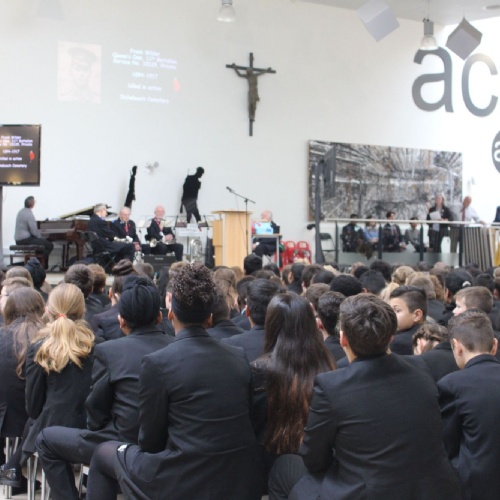 The Remembrance Assembly on November 6th took on a whole new composition this year. We enjoyed the company of 6 members of the Salvation Army Band who played suitable music as the students entered for assembly and again when the students left to go to classes. The assembly comprised of four songs with an image of a serviceman from the Borough being portrayed on screen for 15 seconds. Thus 80 servicemen featured out of the 2,000 plus who died as a consequence of the War. In between the songs poetry was read in addition to two sad stories of servicemen who lost their lives.

The Mayor of Gravesham, Councillor David Hurley, spoke at the end and Councillors Harold Craske, Michael Wenban and Greta Goatley in addition to Mrs Dymond, Deputy Lord Lieutenant of Kent attendee the moving assembly which successfully launched the Poppy Appeal at the School.