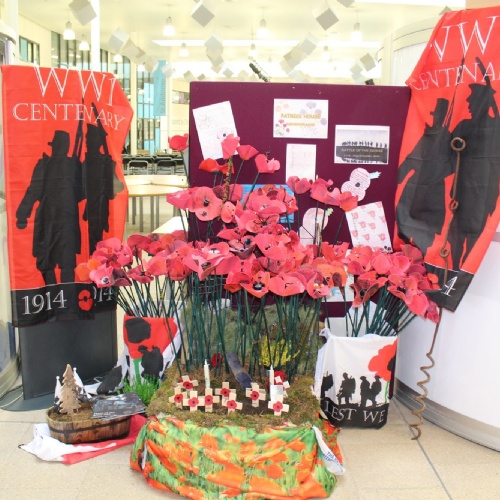 Remembrance at St John’s starts in the days prior to Remembrance Day, November 11th. Every year group has an assembly led by Mr Murphy which focuses on youth, personal loss, local heroes and the future. Students of year 7 and year 8 make the poppy collection on a daily basis with the aim being to have everyone at St John’s wearing a poppy on Remembrance Day.

The whole school Assembly on the Tuesday prior to the 11th focuses on local loss and the tragedy of warfare. The Assembly this year stated with Piper Len Rose opening with a suitable tune on the bagpipes. Mr Murphy spoke on the subject with the Mayor of Gravesham, Councillor Greta Goatley reading the prayer which in this case was the poem “In Flanders Fields”. Mrs Elia, Head of Science, ensured the sounding of the Last Post which proved most poignant.

The Assembly concluded with the message of the Poppy Appeal and support the collection and the wearing of the poppy.

Students of year 7 and Year 8 are collecting for the Poppy Appeal with various Staff Members also ensuring the collecting tins are full. Mrs Jay very kindly made crocheted poppies which quickly sold.

Photos of the event will be available in our Gallery Here.