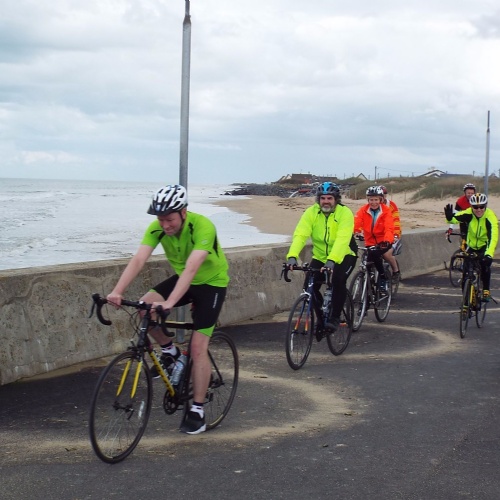 Some ten staff were involved in the Normandy charity cycle which was held on the first weekend of the Easter break. The charity cycle covered the five landing beaches of D-Day, June 6th, 1944 so the cycling took in the major historical sites associated with the landings to include the paratroop and glider landings on either side of the D-Day beachside. The event was over three days and included cycling in excess of 100 miles on two of those days.

Travelling in a minibus and car the staff involved drove from Gravesend to Newhaven catching the overnight ferry to Dieppe and from there drove early morning on Saturday, April 1st to the village of Troarn. It was from here that the cyclists travelled to Pegasus Bridge via the Merville Battery. Breakfast was enjoyed at Pegasus Bridge being served by Madame Arlette Gondree who as a young child witnessed the glider born troops take Pegasus Bridge shortly after midnight on June 5th/6th. From Pegasus Bridge, the cyclists travelled onto Coleville Montgomery [Sword Beach], Courseulles [Juno Beach] and finally onto Asnelles near Arromanches [Gold Beach and the Mulberry Harbour]. Thus 45 miles staring at 7,30am and finishing at 3 pm. On a Sunday the cyclists took in Omaha Beach and Utah Beach travelling through Isigny, Carentan and St Mere du Mont. Starting at 9 am, the cyclists reached Utah Beach at 4,30pm after cycling for 60 miles. The group then travelled to Ravenoville, further up the coast towards Cherbourg where they were entertained by Dave and Celine Ashe. Cake and refreshments were provided after which Dave took the group on a local tour of Ravenoville and the Marmon Farm nearby. Among the paratroopers that landed in the early hours of June 6th was Forrest Guth, ‘E’ Company [‘Easy’ Company – the immortal Band of Brothers as in the TV series, written about by Professor Stephen Ambrose], 101st Airborne Division. Forrest Guth had a camera and took many celebrated photographs on June 6th and in the days following. Several of these were taken in the Marmion Farm which was used as a collecting point and a 1st Aid Station by American paratroopers on June 6th and in the following days. The photographs taken on June 6th at the Farm are celebrated and Dave took us around the courtyard pointing out the background with our on photograph opportunity to recreate the images of June 6th. It was quite exhilarating to stand on the same spot as those soldiers did back in 1944. Dave’s stories of individual bravery proved fascinating.

Our third day was spent in Arromanches and Bayeux where the Tapestry Museum completed the historical aspect of the tour.

Everyone thoroughly enjoyed their experiences to include the cycling and the event is the first of an annual series. The money raised for charity will go to the Gravesham Mayor’s Charity and to Dave Ashe’s Memorial Charity.

More photos can be seen in our school gallery.