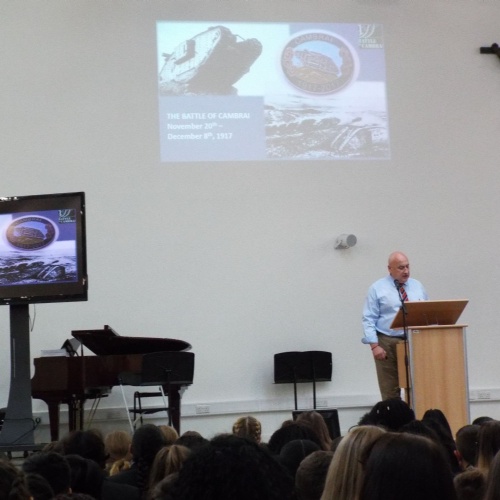 Remembrance at St John’s began on November 7th with the Poppy Appeal being launched at the School through the whole school Assembly. Mr. Murphy outlined through a series of slides the background to the Battle of Cambrai and the first use of tanks and infantry in close combination – the centenary of the Battle of Cambrai fast approaching, November 20th, 1917/2017. Mention was made of the tank men from the Borough who fought in the Battle and of the 23 known men from the Borough who died as a course of the Battle. Our two main gusts for the Assembly – Councillor Harold Craske, Mayor of the Borough and Mrs. Rosemary Dymond, Deputy Lord Lieutenant of Kent were both actively involved in the proceedings which included the playing of the Last Post by Mrs. Elia, Head of Science. The latter was very moving and did add quite an element to the assembly.