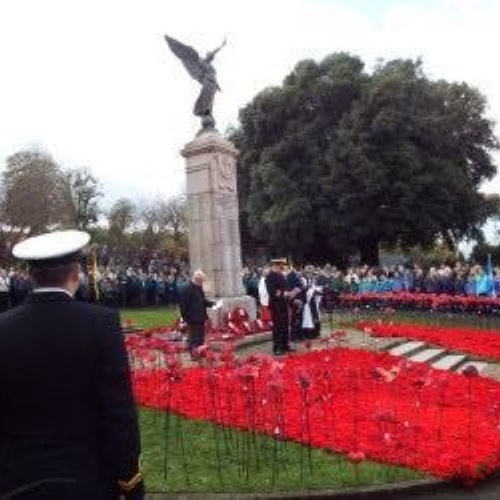 The Borough Remembrance Ceremony was held on November 12th at the Memorial on Windmill Hill.

The Borough Remembrance Ceremony was held on November 12th at the Memorial on Windmill Hill. This year the event was extra special for St John’s as in addition to 6th Former Joel Williams-Modeste reading the poem at the end of the Ceremony, a wreath was laid by Mr. Walton on behalf of the school and students and 565 of the Poppies created by KS3 students this past year were ‘planted’ in front of the Memorial.

Some 12 Year 8 students assembled with Mr. Murphy and Mrs. Murphy at 9am to ‘plant’ the poppies. The work was done in conjunction with the laying out of the carpets of poppies either side to the front of the Memorial. The task was quickly and efficiently done despite the cold and inclement conditions.

The Ceremony was very moving throughout and afterwards the tidy up was quickly and efficiently carried out – the 12 students again being very much involved led by Mr. Walton and Mrs. Walton.

Joel’s reading of the poem was very moving and delivered in an excellent manner.