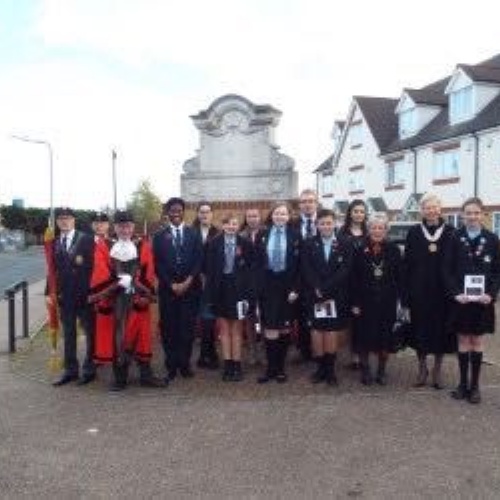 St John’s School has been tasked since last year to organize the annual Service of Remembrance at the Denton Parish Memorial.

St John’s School has been tasked since last year to organize the annual Service of Remembrance at the Denton Parish Memorial. This year the service was at 1pm at the Memorial in Lower Range Road. The quite large attendance – in excess of 200 people – were ready by 12,50pm for the Service which was led by the Rev Graham Herbert. Councillor Harold Craske, Mayor of Gravesham and Mrs. Rosemary Dymond, Deputy Lord Lieutenant of Kent were present. In addition there were representatives of the Armed Forces, the Merchant Navy Association and the Royal Naval Association. Mr Tony Larkin delivered the Kohima.

The Salvation Army played music throughout with Jessica Austen singing the National Anthem to conclude the Service.

A feature of the Service was the reading of the names of the men of the Parish who lost their lives in the Great War. Mr. Barron, Headteacher, read the names as students representing the three schools – St John’s Junior, Gravesend Grammar and St John’s Catholic School, of the Parish laid a rose at the Memorial for each serviceman named.