St John’s Catholic School in Gravesend is very much involved in fund raising for the Normandy Memorial. The fund raising began last June and will continue over the coming months. Among the concepts to raise money was the creation of a biography of the Patron [of the Memorial], George Batts – BATTS FROM BARMING. 6th Form students at the School interviewed George over a number of weeks; the information was written up and collated; proof reading followed and then the printing of the book. Thus not alone was there the acquisition of life skills but the end product was the book which was now available as a fund raising source. The book has proven to be popular and has sold well. [available from the School at £15]. An accompanying Tote Bag was also created by the Citizenship Group as part of their studies. The book and the bag received awards from the Spirit of Normandy Trust and the Historical Association.

The book was launched at the School in Gravesend on Friday, October 4th in the presence of Nick Witchell, Deputy Lord Lieutenant Rosemary Dymond, Councillor Gurdip Ram Bungar, Mayor of Gravesham Borough, Councillors Dakota Dibben and Harold Craske, two Normandy Veterans – George Batts, MBE, Ld’H and Roger Drsicoll, Ld’H and other dignitaries. Head of History at the School, Colm Murphy presided over events which began with a presentation focusing on the School’s involvement with the Memorial. 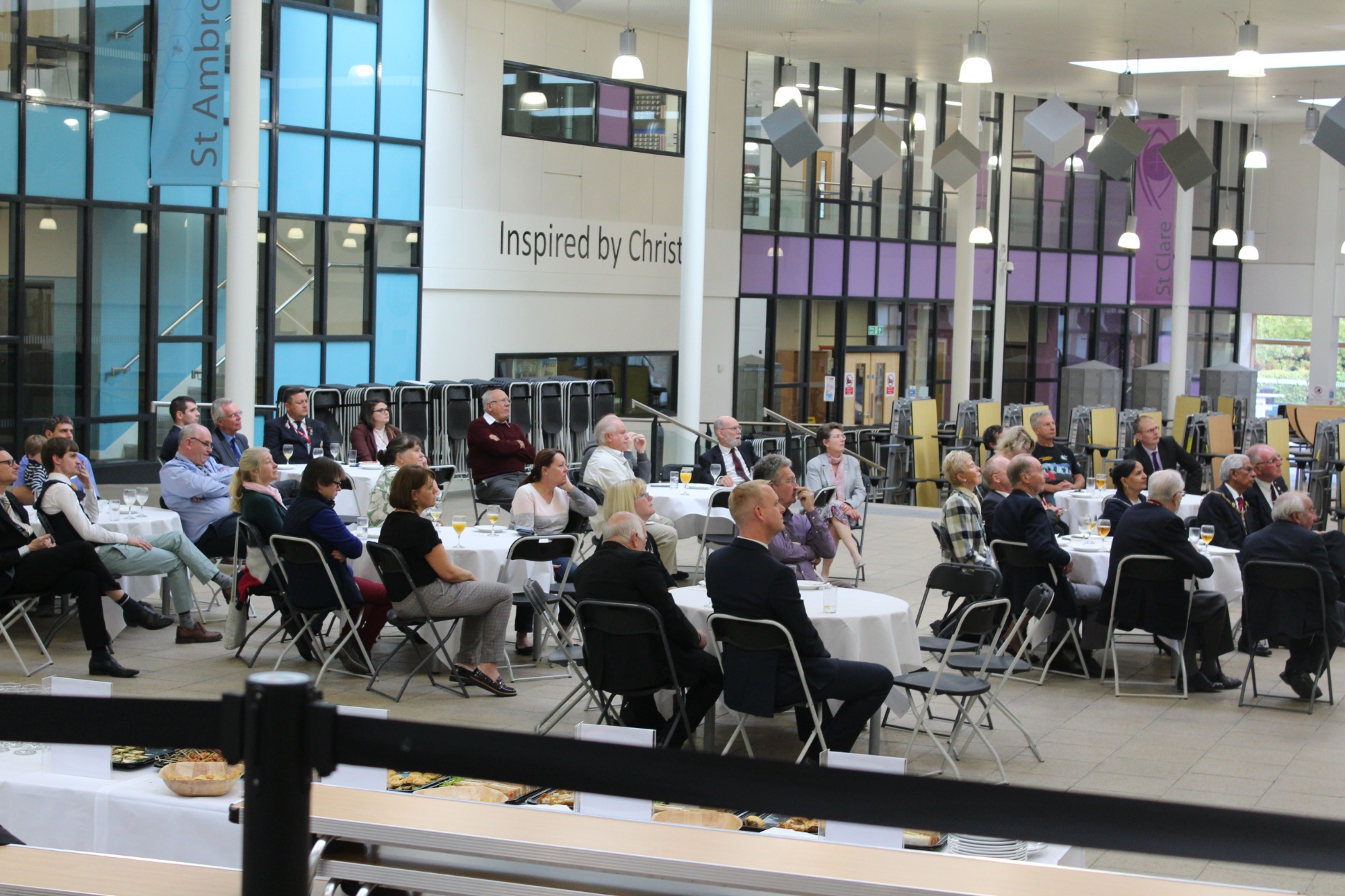 Two cheques – each for £1,000 – one from students fund raising in the School and the other from sales of the book – were presented to Nick by Head teacher, Matt Barron and George. The student fundraising took a number of forms – non-uniform day to sponsorship. In addition several items – donated by staff and parents of the School – were given over to be sold at auction with proceeds to the Memorial Fund. The items include signed and framed images of Usain Bolt and Andy Murray and a football boot worn by David Beckham and signed by him.

During his presentation, Colm outlined a variety of fund raising endeavours over the coming year. There will be a staff cycle of the 5 Landing Beaches in Normandy in April with 15-20 staff involved, a non-uniform day, a School Christmas Fayre among other endeavours. A major innovation will be the adoption and sponsorship of a serviceman from Gravesend who will be listed on the Memorial. Each year group at the School will adopt a serviceman. It is hoped that this alone will raise in excess of £2,000. It is also intended by 6th Form Students to publish a booklet on local servicemen who lost their lives during the Normandy Campaign.
Sales of George’s book will continue to raise further funds.
The plan extends to include the local Community in the fund raising through writing to companies, clubs and associations for support. In addition other schools in the Borough will be involved in the whole endeavour. The idea is that as many schools will follow the lead of St John's and get actively involved. The plan is not alone to raise funds but also to create a sense of empowerment and ownership of the Memorial.
After the various presentations and talks, George enjoyed a book signing session with many books being sold on the night. Excellent evening that everyone enjoyed.